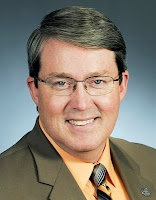 Earlier this month, Rep. Mike Beard (R-MN) introduced legislation to lift the moratorium on coal-fired power plants. In his defense of the legislation, Beard began spouting what sounded like science to anyone who would listen.  Unfortunately, like many of Beard's peers, Beard's stance on the climate relies very little on science, and very much on anecdotes, denial, and theology.  This brand of climate pseudo-science removes all responsibility from mere mortals, trusting that an all-powerful God has everything under control.

Don Shelby, writing in the MinnPost:

A lot of what Beard knows he learned in church. One Congressman, talking about global warming, recently said that God wouldn't allow man to do anything to destroy the planet. Beard told me, "It is the height of hubris to think we could."  I asked him about nuclear war. He said: "How did Hiroshima and Nagasaki work out? We destroyed that, but here we are, 60 years later and they are tremendously effective and livable cities. Yes, it was pretty horrible," he said, "But, can we recover? Of course we can."

Beard believes that "God is not capricious. He's given us a creation that is dynamically stable. We are not going to run out of anything."  Full Story Here
Posted by eshep on 2/17/2011