If there's one thing that's clear from Billy Ray Cyrus's highly publicized GQ interview, it's that Mr. Soulpatch takes no responsibility whatsoever for Miley's troubles. He's blaming everything from Mickey Mouse to Hollywood for his failed marriage and poor parenting.

But this nugget, from page 5 of the interview, really lays it on thick:

"Somewhere along this journey," he says, "both mine and Miley's faith has been shaken. That saddens me the most." When they first came to Hollywood for Hannah Montana, the two of them would drive down the freeway together to the studio each morning, and every day Miley would point out the sign that said

Just before moving out to Los Angeles, the whole family had been baptized together by their pastor at the People's Church in Franklin, Tennessee. "It was Tish's idea," he remembers. "She said, 'We're going to be under attack, and we have to be strong in our faith and we're all going to be baptized...'" And there, driving to work each day in the City of Angels, was this sign. "A physical sign. It could have easily said 'You will now be attacked by Satan.' 'Entering this industry, you are now on the highway to darkness...'"

Do you really see it in such clearly spiritual terms—that your family was under attack by Satan?

"I think we are right now. No doubt. There's no doubt about it." 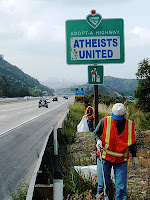 And why is that happening?

"It's the way it is. There has always been a battle between good and evil. Always will be. You think, 'This is a chance to make family entertainment, bring families together...' and look what it's turned into."

Perhaps Mr. Cyrus could have prevented some of his problems by focusing more on being together as a family.  Perhaps doing something that allowed his family to bond while doing something positive, like, say, adopting a highway.
Posted by eshep on 2/16/2011