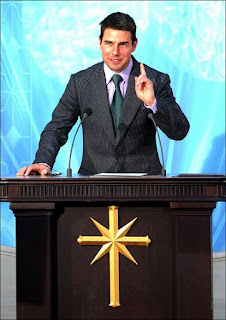 In the wake of the recent split of Tom Cruise and Katie Holmes, there has been an increase in column inches devoted to Scientology. (The split also prompted some Twitter nastiness from Rupert Murdoch).


Having practiced Scientology for 30 years, Cruise has traveled the so-called "Bridge to Total Freedom" to achieve, through intense "auditing" sessions and other practices, a rarefied sense of enlightenment. Scientologists mark the path to the "Bridge" with ascending grades or stages, and, Janet Reitman's Rolling Stone story reports, Cruise is at the very advanced "OT VII" stage. Operative Thetans, Reitman says, have "have total 'control' over themselves and their environment. OTs can allegedly move inanimate objects with their minds, leave their bodies at will and telepathically communicate with, and control the behavior of, both animals and human beings." The more advanced Cruise and other Operating Thetans become, Reitman reports, they reach a God-like state: "At the highest levels, they are allegedly liberated from the physical universe, to the point where they can psychically control what Scientologists call MEST: Matter, Energy, Space and Time.

That's certainly some pretty weird stuff. Especially since there is no evidence whatsoever for psychokinesis. Magician and skeptic James Randi has offered $1 million to anyone who can produce a paranormal event, such as psychokinesis, in a controlled, mutually agreed upon experiment. Other organizations have come forth to offer prize money totalling $2.6 million for evidence of the paranormal. That money has been sitting there unclaimed, and I don't think it's going anywhere anytime soon.

Why, then, are adherents of other religions so quick to call Scientology kooky? Don't they embrace some fairly outlandish beliefs as well?

Part of what seems silly about Scientology is its newness (not to mention the fact that the founder was a science fiction writer). Humans also are heavily influenced by tradition, and many of us are born into our religions. Something can't be that kooky if it's been around for 2,000 years and if we were born into it, right?

That depends on your perspective. To those who do not entertain supernatural notions, religions are all different shades of unbelievable.

A Tom Cruise-related story over at Discovery touches on this observation:


Though many elements of Scientology theology (written by science fiction author L. Ron Hubbard) seem strange, it’s fair to note that many religions include paranormal or supernatural beliefs including virgin birth, walking on water, miraculous healings, garments and amulets that protect the wearer from harm, and so on. One man’s miracle is another man’s superstition.

Plus, there are many reasons for religious people to call Tom Cruise crazy without goofing on his religion.