Michio Kaku: What Physics Can Do For You

"If [your great-grandparents of the year 1900] could see you now, with iPads and iPods and satellites and GPS and laser beams, how would they view you?," asks Michio Kaku. "They would view you as a wizard or a sorcerer. However, if we could now meet our grandkids of the year 2100, how would we view them? We would view them as gods." 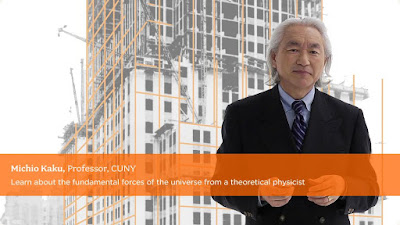 Via The Big Think:


From the standpoint of our agrarian ancestors, the marvels of the post-Industrial world would appear to be sorcery. (What would a Renaissance man make of a vending machine, let alone an Ipad?) Kaku predicts that likewise, the people of 2100 will have harnessed "the power of the gods" by present day standards, defeating barriers like age and distance. "We will have that flying car that we’ve always wanted to have in our garage," he says.

But the most interesting places in the universe are beyond the reach of Einstein's equations, says Kaku. He's searching for "An equation like E=mc². That equation is half an inch long and unlocks the secret of the stars. Why do the stars shine? Why does the galaxy light up? Why do we have energy on the earth?" These are the questions we can still only dream of answering.

Michio Kaku is a smart guy. He's a theoretical physicist, a professor, an author, a speaker, and happens to be the co-founder of string field theory.

He's also very good at explaining science to people who aren't quite as smart, like myself.

In the latest online course offered by The Floating University (a new media venture with the aim of democratizing education), Kaku serves up a lecture called "The Universe in a Nutshell: The Physics of Everything."


What if we could find one single equation that explains every force in the universe? Professor Michio Kaku explores how physics could potentially shrink the science of the big bang into an equation as small as e=mc2. Physics powers every electronic device in your living room, underwrites every technological breakthrough, and thanks to advances in string theory, could allow us to escape the heat death of the universe, explore the multiverse, and unlock the secrets of existence.

In a profoundly informative and deeply optimistic discussion, Professor Kaku delivers a glimpse of where science will take us in the next hundred years, as warp drives, teleportation, inter-dimensional wormholes, and even time travel converge with our scientific understanding of physical reality. While firing up our imaginations about the future, he also presents a succinct history of physics to the present.

How did Halley's Comet manage to start the British Empire in 1066 and lead to the most important publication in human history in 1682? What are the four ultra-powerful forces that dictate all observable phenomena in the universe and how did we find them? How is 96% of matter in the universe undetectable? And why is the emergent field of string theory turning everything we thought we knew about physics upside down? In under an hour, Professor Kaku makes a compelling case that physics is the key to pretty much everything.

See below for an excerpt of his lecture. Visit The Floating University to subscribe and view it in its entirety.