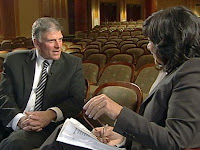 Franklin Graham, the son of the more eloquent and compassionate evangelist Billy Graham, stated on ABC's This Week that in order to fulfill scriptural claims, the second coming will incorporate social media.


"The Bible says that every eye is going to see (the second coming). How is the whole world going to see (Jesus Christ) all at one time? I don't know, unless all of a sudden everybody's taking pictures and it's on the media worldwide. I don't know. Social media could have a big part in that...

Everybody's got their phone up and everybody's taking recordings and posting it on YouTube and whatever and sending it to you, and it gets shown around the world."

Graham, who previously has shown a fondness for Sarah Palin, also stated that Donald Trump is his "candidate of choice."


"Donald Trump, when I first saw that he was getting in, I thought, well, this has got to be a joke. But the more you listen to him, the more you say to yourself, you know, maybe this guy's right."

Kind of makes one second-guess Franklin's previous prediction.
Posted by eshep on 4/25/2011